‘Man on a Ledge’ surprisingly tense if uninspired

Don’t be fooled: The man in “The Man on the Ledge,” attempting to convince everyone in Midtown that he’s going to jump from the 21st story of the Roosevelt Hotel, is not going to jump. You know it. He knows it. The random person on the street knows it. It seems the only ones who don’t know it are the people trying to get him back inside. And that’s only the beginning.

“The Man on the Ledge,” directed by Asger Leth and starring “Avatar’s” Sam Worthington, is an exercise in coincidence. Nothing happens as it’s meant to, but everything seems to progress as though it had. When the “Mission: Impossible”-style antics hit roadblocks, a side road always opens up. Every single time. It’s not enough that the singular act of standing on a ledge seems to attract a crowd rivaling an Apple release party, but it has to draw a crowd that would seem welcomed at an Occupy protest.

It’s difficult to tell if “Ledge” aims low and hits its mark with a lackluster sense of accomplishment, or if it tries to be as serious as some of it’s cringe-worthy lines would suggest. The main story focuses on a heist wrapped in a deep sense of redemption. You see, Nick Cassidy (Worthington) has been framed: He was sent to federal prison for the theft of the Monarch diamond, a gem worth more than $40 million. But (and this is hardly a spoiler), he didn’t commit the crime. It would seem the precious stone never left its owner’s hands, the nefarious David Englander (Ed Harris), who collected a hefty insurance policy for the diamond’s theft.

So, in an effort to prove his innocence to a skeptical New York crowd, he hovers on the brink of death, one step from going splat. The mission: prove the diamond was never stolen. In order to do that, though, he needs to create a distraction so his brother and his girlfriend can break into a secure, state-of-the-art vault.

Here is probably some of the movie’s only saving grace: Nick’s family is stereotypically hilarious. His brother, Joey (Jamie Bell), and Joey’s girlfriend, Angie (Genesis Rodriguez), are about as spy-talented as Steve Carrell in “Get Smart,” but the two of them, through their constant “Three Stooges” bickering and Nick’s clever planning, manage not to blow themselves up. This is where the most tense and humorous scenes occur, and they were sorely needed.

The vast majority of the movie, however, doesn’t occur in ventilation shafts or while breaking into secure locations. As its title title suggest, this movie centers around a man on a ledge. Here, Nick exchanges sharp banter with Lydia Mercer (Elizabeth Banks), a hostage negotiator Nick specially requested to handle his “suicidal” urges.

As the two get to know each other, she decides to believe his improbable story, siding with him against the baddies, including his former partner, Mike Ackerman (Anthony Mackie).

There’s not much to “Man on a Ledge,” even if you include the swipes at the financial collapse and the titans who walked away mostly unscathed. And for an idea that seemed fresh on paper, that’s a shame. But there’s enough tension and suspense to make the movie bearable, and if you’re willing to suspend disbelief for a little bit, you may not want to push Nick off the ledge yourself. 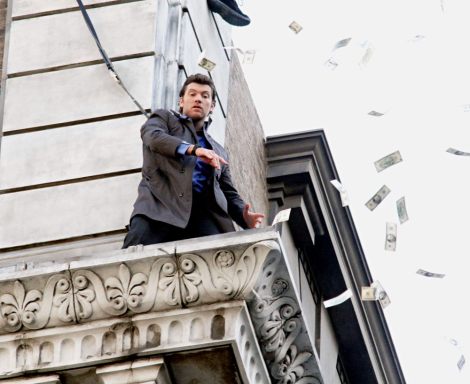 Sam Worthington is shown in a scene from "Man on a Ledge." (Photo credit: Summit Entertainment)

This site uses Akismet to reduce spam. Learn how your comment data is processed.

‘The Walking Dead: The Final Season 1 — Episode 4: Take Us Back’

What are you looking for?